Canada’s headline inflation is falling, but core inflation, the central bank’s preferred measure, is still climbing. That was the focus of a research note from National Bank of Canada (NBF) last week, in response to July inflation data. Core inflation, considered a more stable measure, climbed to a three-decade high. Even more surprising, this year’s numbers have been revised three times, meaning this measure isn’t as stable as the central bank believed it was.

NBF found the average of the three core measures continued to rise in July. The rate reached 5.3%, the highest it’s been in over 32 years. The sudden boost was so large due to significant revisions to previous data. 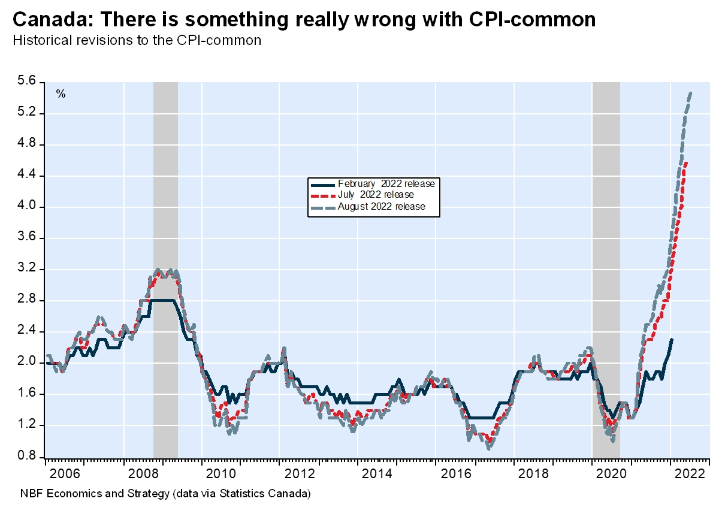 The bank points to January 2022 data that was originally reported at a fairly robust 2.3% in the February report. Last month, Stat Can revised January’s core inflation to 3.2%, adding nearly a full point. The fun didn’t stop there, in the August release January 2022 was revised once again to 3.6% — more than a point higher than originally reported.

“The cumulative revisions since the beginning of the year are nothing short of dramatic,” said the bank.

It’s important to emphasize that core CPI is supposed to be much less volatile than headline. It’s used to reflect capacity pressures and indicate excess demand. The BoC downplayed headline inflation, believing the economy wasn’t firing on all cylinders at this point.

They eventually dismissed the odd situation as not appearing in core inflation. With the revisions, core inflation shows Canada breached excess demand back in October. The central bank was still using quantitative ease (QE) to create inflation at this point.

“Without going into details, suffice to say that the recent upward deviation of inflation has challenged the statistical method the CPI-common is based on and made it a lot more volatile and less correlated with other measures of core inflation,” explains NBF’s economists.

“Given this inherent weakness, we recommend focusing on CPI-Trim and CPI-median, which have proved better at capturing underlying inflation trends.”

All of this isn’t to say there’s some sort of concentrated effort to downplay inflation. Though NBF has previously explained methodology changes will persistently downplay inflation going forward. It more so highlights this indicator doesn’t quite show what the central bank thinks it does.

Bezos once explained this issue very concisely: “…when the anecdotes and the data disagree, the anecdotes are usually right. There’s something wrong with the way you are measuring it.”

If the monetary system is based almost entirely on inflation targeting, how it’s measured requires much more public discussion.